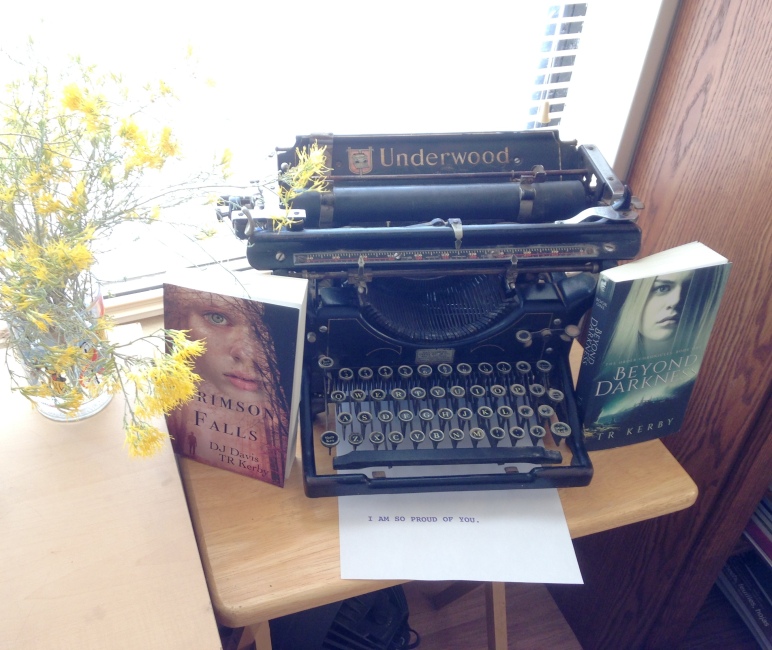 When my first two books were published nearly simultaneously, my husband presented me with a circa 1915 Underwood typewriter which he rescued from his mother’s storage shed. He lovingly cleaned and oiled it and stashed it in a dark corner of our own storage shed until the time was right.

But the little typewriter that had its beginnings there is still here, solid and steadfast. And beautiful. Each round key is a work of art with the upper case letters displayed in a flowing script. Its ribbon is brittle with age, but it is otherwise perfectly functional.

Typing on it would require commitment to every letter and space. Mistakes are nearly permanent and the keys take a degree of effort to push hard enough to impress ink upon paper. There could be no wishy-washy tap of a letter. One had to be certain and act accordingly. And create something unique. Something that can’t be printed off a dozen times, or a hundred.

Our modern computers are much more forgiving, whether that’s to our benefit or not is debatable.

Not that I’m complaining.

I personally wouldn’t want to write a book using the Underwood, but I can see how it might curb things like internet trolls.

Or not. Who knows? People are people…

As I look at the typewriter, I’m inclined to wonder about the things it has seen and the fingers that have touched the keys.

Who else typed their special thoughts on this workmanlike machine? Were they letters to a soldier in WWI expressing emotions that no mere words can capture? Was there correspondence to families of men who would never come home?

A few years later, the typewriter would have witnessed the Spanish Flu epidemic. Were newspaper articles pecked out on its keys? Measures to take to avoid the disease?  Notes informing of lost loved ones?

I am not a nostalgic person. I don’t believe there is any such thing as the “good old days.”  Nothing exists that humankind has not already endured. As I look through the historical timelines from the early years of the Underwood’s existence, I see pandemics of Spanish flu and typhoid. I see the use of chemical weapons and bombings of cities. I see anti-Semitism and racism. I see political upheaval and division.

I see volcanic eruptions and heat waves. Fires and floods. Hurricanes and earthquakes.

But I also see something else. I see human innovation and resilience. I see films, books, and art.  I see a human spirit unbroken by adversity and hardship. I see truly heroic acts of selfless compassion.

My little Underwood has been present as the events of the world unfold in cycles. Cycles that repeat again and again and probably will long after both the typewriter and myself are gone.

And on a deep level, that brings me comfort. What we are experiencing now is not different from what has been experienced in the past. It might be new to us, this generation, but it is not new to humanity. And humanity continues, following a rhythmic drumbeat forward.

Or is that typewriter keys I hear?

This site uses Akismet to reduce spam. Learn how your comment data is processed.